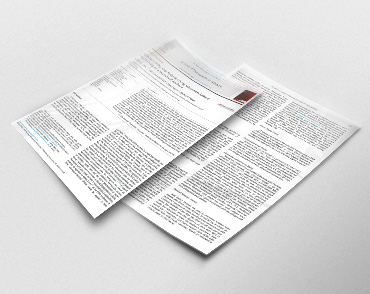 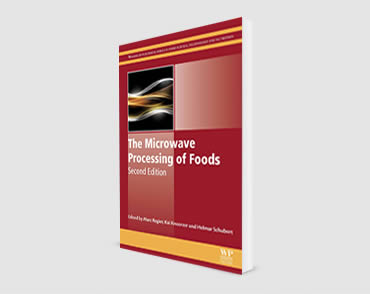 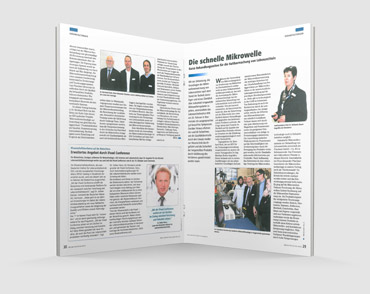 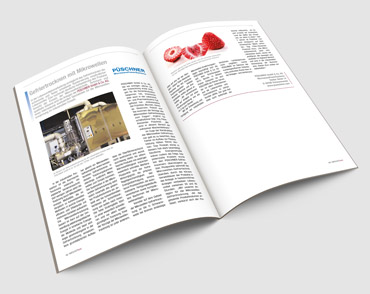 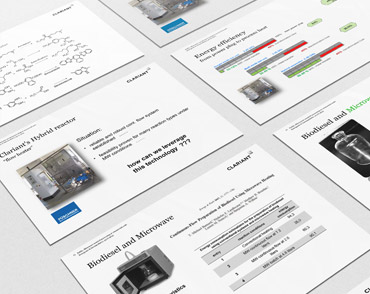 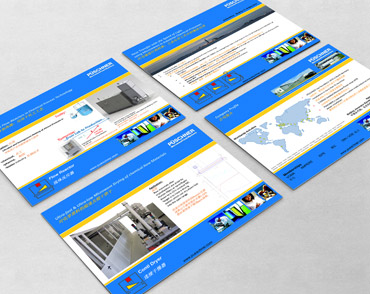 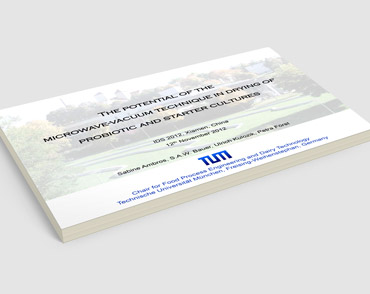 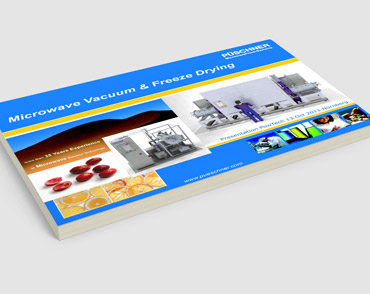 The article gives an insight into the latest development of microwave freeze. Basics and examples are explained. Samples were shown at our stand Hall 9 / 542 PowTech 11-13.Oct 2011, Nürnberg/Germany, www.powtech.de 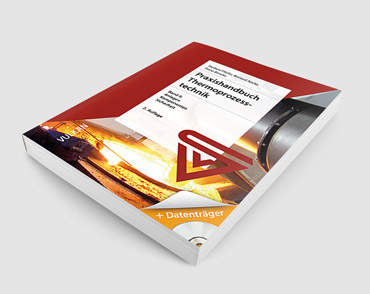 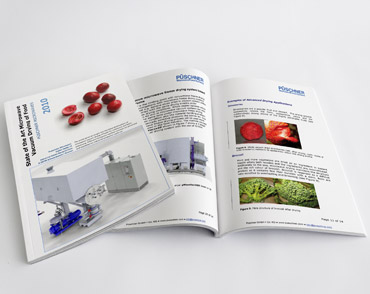 State of the Art Microwave - Vacuum Drying of Food

The article gives an insight into the latest development of microwave vacuum drying of foods for continuous and batch processing. Different microwave machine concepts are presented and explained for industrial production scale use.
17th International Drying Symposium, 03.10.2010 - 06.10.2010, Magdeburg/Germany, www.ids2010.de 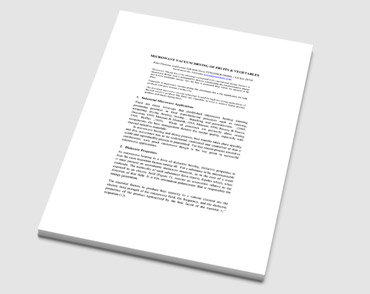 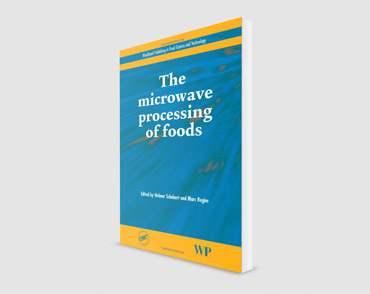 New on the market: Microwave Sintering 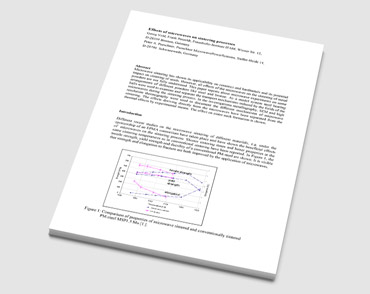 Effects of Microwaves on Sintering Process 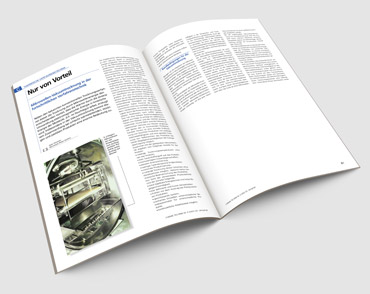 Mikrowellen-Drying in the High-end Technology 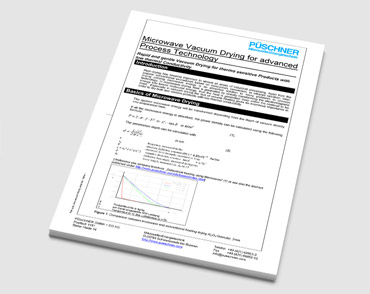 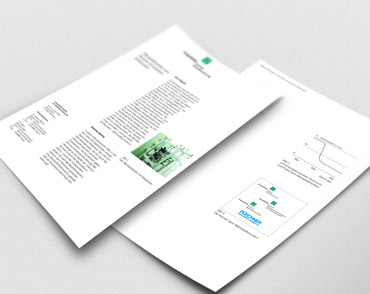 Compacted ceramic powder cores are normally sintered at elevated temperatures in order to improve their mechanical stability by means of enhanced density and a small grain size. During sintering in conventional high-temperature furnaces, the energy from live molybdenum heating elements is transferred to the powder blanks via infrared radiation and thermal conduction. The low depth of penetration of the energy into the powder blanks and the associated high temperature gradient mean that the rate at which the powder blanks can be heated up must be kept extremely low, in order to prevent the occurrence of cracks in them. The high-thermal capacity of the known furnace types and the merely slow transfer of heat to the powder blanks result in a long heating-up and cooling period which cause long system downtimes if malfunctions occur. In addition, conventional high-temperature furnaces require comprehensive thermal insulation in order to efficiently reduce ambient heat loss. It is, nonetheless, necessary to renew the thermal insulation partially or completely at regular, relatively short intervals. The system remains unavailable for prolonged periods due to this work. The following article describes a microwave concept which avoids the above-mentioned disadvantages of conventional molybdenum technology and, in addition, offers process-engineering benefits.

High-Temperature Technology based on Microwave Systems

Abstract:
The importance of the microwave process technology in the production of ceramics has rapidly increased within the last years. Higher densities, more homogenous structures, less granulation growth, and a drastic saving of energy were only some of the advantages. Many procedures are now well tested under laboratory conditions. Yet, the only problems we are facing today are connected to the upscale measure of laboratory prototypes, in order to achieve industrial throughput rates. This article intends to give an insight into the state-of-the-art microwave sintering of ceramics. Some actual applications of laboratory prototypes as well as installed pilot plants are presented.

5 / 1997
Cosmetics production can no longer be imagined without the versatile and multi-active ingredient Panthenol. An addition of 0.1% up to 5% D-Panthenol is capable of distinctly improving the protective and cosmetic efficacy of skin and hair care formulations. This is induced by the substance's moisturizing, anti-inflammatory, hair strengthening and regenerating effects, as well as its epithelial cell growth stimulation. As yet, however, problems existed in handling the highly viscous material (10500 cPa/30°C), which needs to be liquefied first in order to be processed into the various cosmetic formulations. An improvement of the substance's flow characteristics is usually accomplished by heat exposure of 70 °C, preferably using a water-bath or an incubator. Higher temperatures should be avoided to ensure the compound's stability and activity. Equilibration of the final temperature by conventional means is a time-consuming process lasting several hours, and as such produces costs and reduces the flexibility in production. A solution to this problem was developed by a producer of the compound (Daiichi Pharmaceutical Europe GmbH) in cooperation with a producer of industrial microwave heating plants. The novel procedure utilizes microwave energy (microwave radiation) in which heat is generated by direct conversion of electromagnetic energy into molecular kinetic energy, i.e. within the raw material itself. The heat must not penetrate into the product via high surface temperatures, but is produced within the range of the radiation's penetration depth. In our trial investigations standard packages such as 10 kg HD-polyethylene bottles were uniformly heated from 20 °C to 70 °C by employing a microwave plant for 5 minutes at 4kW. Fluidizing the samples was achieved approximately 70-times faster than by employing conventional heating technology which would require about six hours to carry out the same task. Different plants with power ranges from 3kW up to 12 kW are designed to manage all container models usual in trade between 10kg and 200kg. The heated samples were subject to extensive analysis. The active D-panthenol isomer accounting for the biological activity of the vitamin remained structurally intact. At high ambient relative humidity, a slight moisture increase occurred due to the hygroscopic properties of the compound. Upon exposing the samples to extreme heat above 120 °C, no racemates were formed, but a molecular cleavage yielding the precursors of synthesis did become observable. Owing to advanced microwave technology, such over-heating can now be excluded. The whole heating procedure runs automatically and is actively controlled by means of temperature monitoring. As soon as the sample has become fluid, the temperature is held constant. Thus, the innovative procedure presents an alternative to conventional heating, which is gentle to the product and also maintains its high quality. Other advantages result from the short heating times which enable quick responses to short-term production changes and allow more flexible organization of the entire logistics. The high degree of total efficiency and the immediate operating readiness guarantee economic performance. Finally, other highly viscous components can be processed using the microwave plant, such as emulsifiers. Melting is a common procedure in the further processing of cosmetic raw materials. Known conventional heating methods based on contact, convection, and infrared-radiation can be partially substituted by microwave radiation. There are experimental results now available in this field of application as well. For example, the time needed to heat up an amount of 5 kg of various emulsifiers to 70 °C, upon applying a power of 3kW, was between 6 and 11 minutes. Consequently, a microwave plant is universally applicable. New perspectives in the technology of cosmetics production are conceivable for the near future.

An important task in the field of environmental technology for industries employing organic solvents is to purify occurring process and waste waters. From an economic perspective, it is clear that attempts should be made to separate the organic solvent from these waters and recycle it back into the original process. One solution for the recovery of organic solvents consists of applying adsorption procedures. This represents the current state-of-the-art in waste water treatment and other technologies involved in water management and environment protection. Mostly, the efforts required for regenerating the adsorption material determine the economic efficiency of the method. The prolonged regeneration times in thermal desorption, which are due to the low thermal conductivity values of the absorbing materials, exert disadvantageous effects on the costs of these procedures. In a research project supported by the German Federal Foundation for the Environment, an adsorption procedure to purify waste waters, along with the recovery of organic solvents by heat desorption, was developed at the Technical University in Berlin. In cooperation with the Püschner Microwave-Energy Technical Company in Bremen, this university is concerned with research in the treatment of raw materials and remainders.,. The heat needed for the desorption process was supplied to the absorber with the aid of microwave energy. Thus, the low thermal conductivity of the absorber does not limit the heat input, and as a result, very short regeneration times can be expected. Hydrophobic Na-ZSM5-zeolite was used as a hydrophobic adsorbent which was intended to guarantee a selective separation of the organic solvent/ water mixture. The investigations were carried out using ethanol concentrations ranging from 1 vol% up to 5 vol%. A 4- to 10-fold concentration of the ethanol from the original mixture was successfully accomplished. By employing microwave energy in the desorption step, the regeneration time was considerably shortened as compared to the regenerative procedures using thermal energy. A capacity loss in the zeolitic material was not observed after the performance of several adsorption -and desorption cycles. Another advantage of employing microwave energy consists in the homogenous distribution of the desorption heat within the column of the absorbent, whereby the temperature hardly exceeds the evaporation temperature of the organic solvent/water mixture. As a result, the recovered solvent is not structurally destroyed and is ready to be re-employed in the process. 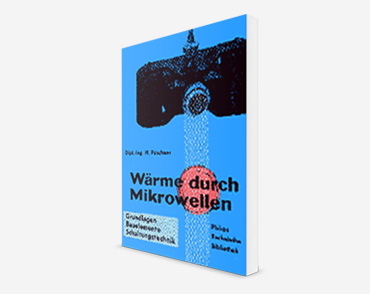